J.B. Christopher in the Noir Room

J. B. Christopher has a new book out, see? On the Edge. It’s a crime novel. A noir, full of bad guys and a gumshoe with a badge, so I guess you’d call him a copper. J. B. dropped by the blog mansion and we had a little chat in the Noir Room.

J. B. Christopher: Why is it so dark in here?

Johnny: Wait a minute. Let me get the blinds.

J: Let me turn on the fan with the backlight. How’s that?

JB: Really? That’s your solution? A slowly spinning fan with a light behind it?

JB: It’s raining. When did it start raining?

J: It’s always raining out that window. Watch the water bead up and run down the panes in monochrome.

JB: The whole room is black and white. How’d you — 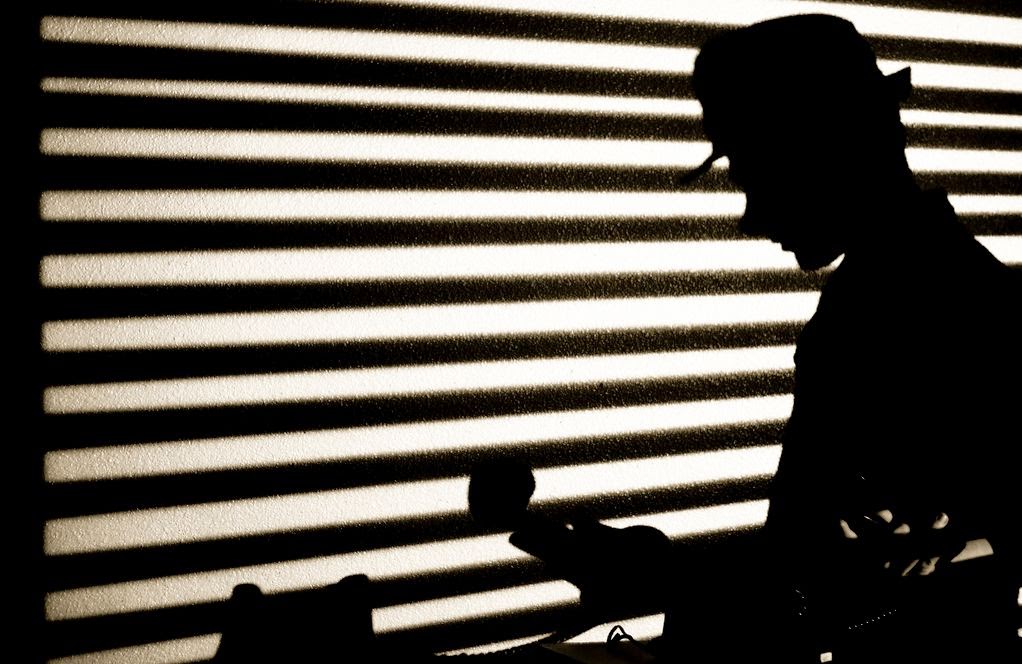 J: Stop beating around the bush. Tell me about your book or do you want me to get rough? What’s On The Edge about?

JB: It’s about a man who has some pretty tough choices to make. The main character, Detective Oliveras, is tested after a landmark Reno casino is nearly destroyed with a failed bomb-extortion plot.

The police brass are under pressure from the mayor’s office, want to pin the crime on the casino’s owner. During the investigation, Oliveras learns that the casino housed a sordid off the books club frequented by politicians and business men alike. Drugs, kink, gambling.  The story tracks the investigation of the bombing and Oliveras figuring out where was all the money going from the club. He keeps the second part secret from his partner, and the reader doesn’t know until the end if Oliveras succombs to temptation and makes off with the cash.

That’s a long way of saying it’s a story about a man who has to make a choice after he learns the system he was so loyal to, had failed him so badly. 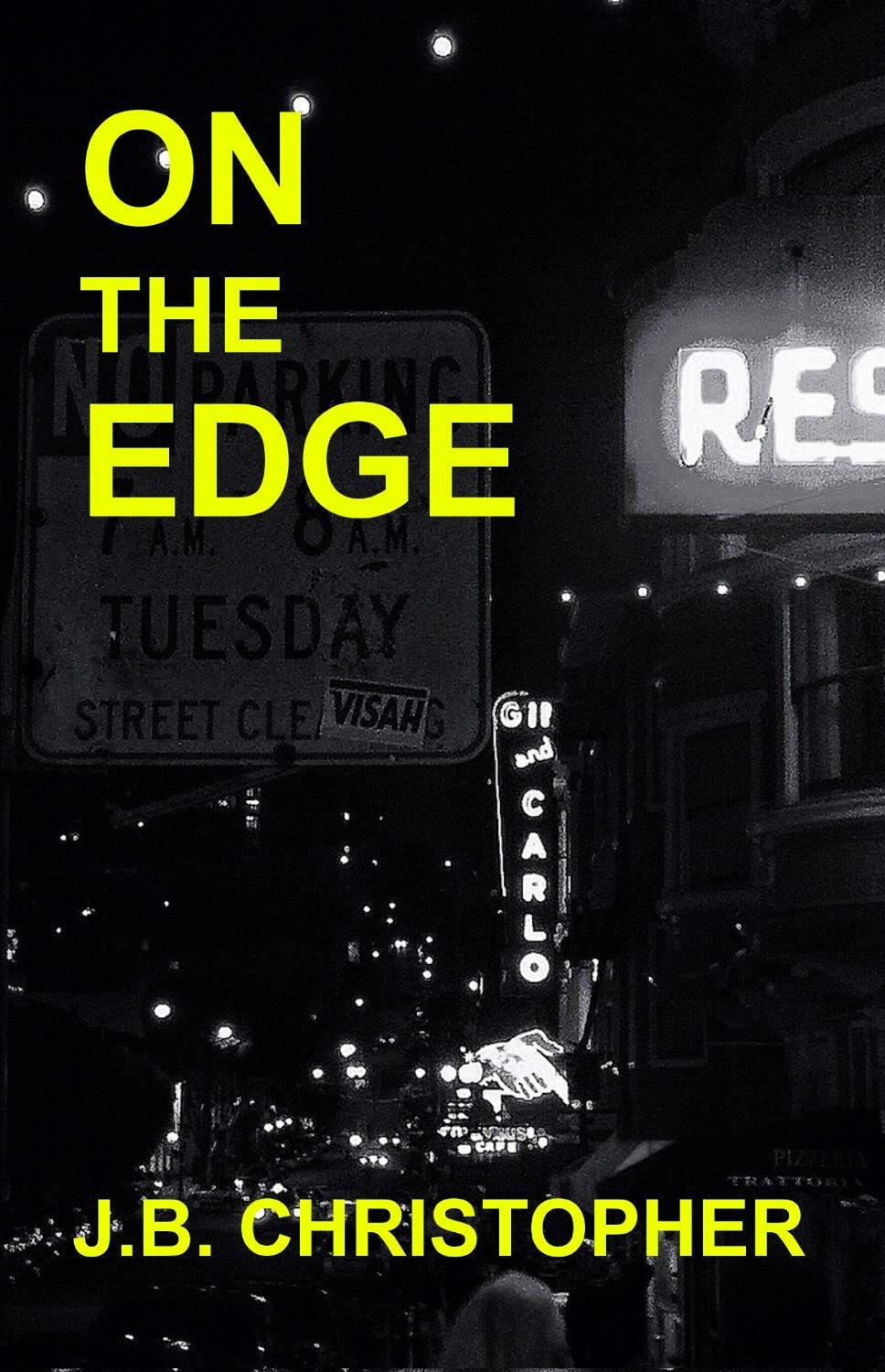 J: Tell me something I don’t know. Here have a cigarette.

JB: Federal informants are well paid when compared to their local counterparts.

J: That's good to know actually. Thanks. Here’s a highball. If that doesn’t loosen your tongue maybe the boys down by the docks will have something to say.

JB: It’s nine in the morning. Who drinks this early?

JB: As long as it was with a beer back.

JB: He is pretty clean, almost naively so. He was stubborn with his personal code which manifested itself with anger issues.

J: A crappy high stakes poker game is nothing to get worried about. Where’s the edge in On the Edge? Now if there’s a girl, a woman, a real woman, like this one, then maybe it gets interesting. J: This is Sylvia.

J: She’s got the gams. So who’s the femme fatale in On The Edge?

JB: Susan Vega. She’s as sultry and duplicitous as they come. A con artist who had previously done time for identify theft, she seduced casino owner Jacky Murray, and learned how Jack was skimming moneyfrom his own casino and was running an off the books club. She learned the money was hidden somewhere in the casino. But with the failed bomb plot (it partially exploded), access to the casino was closed to the public as the building was structurally unsafe. She needed Oliveras to help her get the cash.

J: What is the JB about? What’s the real name behind the alias? What are you hiding?

JB: I have a very uptight day job, so keeping the identities separate seems like a good idea.

J: That’s suspicious. Are you on the lam? My sources tell me you hop between Portland Oregon and Hawaii. What’s up with that?

JB: My work is in Portland. Wife and family are in Hawaii. 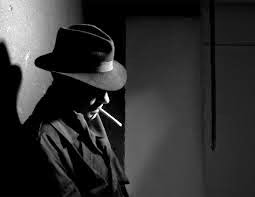 J: Suspicious. How’d you get into this writing racket anyway? What’s your story from scribbler to author?

JB: I always wanted to write fiction. Lying is a fun way to turn a buck.

J: So true. Will there be a sequel to On The Edge or are you moving on, you dodgy running rebel?

JB: There is a sequel (Bridgetown). I’m pimping it out to publishers as we speak.

JB: I primarily write in the evenings.  Work, kids, dinner, sit down around ten and write for a few hours. Go to bed, wake up, repeat.  I keep a notepad (or evernote on iPhone) with me at all times I’m constantly jotting things down - bits of dialog, concepts, etc.  That sounds like more of a routine than a process.

J: Where on the internets can folks find you?

JB: No. That was pretty strong. I’m getting dizzy.

J: Yes it was. I slipped you a Micky Finn.

J: Easier to fit you with some concrete loafers.

J: You’re a snitch. A stoolie. You talk too much. Give you a dark room and mood lighting and you sing like a canary. I can’t risk you running around ready to drop a dime on me. Best to bump you off. Make you croak. Capiche?

J: I’m not going to kill you. But I will be taking your kidneys. Noir rooms aren’t cheap and I’m into Sylvia thirty C’s.

JB: That was unexpected.