OF KINGS, QUEENS AND COLONIES; a Book of Coronam 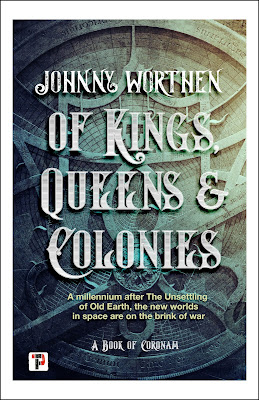 Every time I launch a book, I take a moment to consider. It’s a milestone in any author’s life. Even for those authors who’ve forgotten how many books they’ve published and have three lined up for this week. It matters. It’s important. It’s emotional.

The old analogy that books are like children is real. We birth them, form them, love them and then set them out into the world. Our hands are tied then. There’s really nothing we can do after they leave. We can’t control who they meet, how they’re received. The love they get, the heartbreak. Maybe we can offer few good word here or there, a boost where we can, a defense when we’re able, but it’s the book’s life now. We only started it. Nevertheless though our power to shape its destiny is waned, our attachment has not. It is a part of us and will always be so. A reflecting however dim of ourselves. A dream we once had. An hope, a prayer, an idea we dared share.

But this one is different.

It’s been mentioned to me that I have a different voice in every genre, Tony’s sarcasm in the Flaner series is a world different from Eleanor’s longing in the Unseen. The holy madness of WHAT IMMORTAL HAND is a qualitative divergent from the seriousness of THE BRAND DEMAND. To all these genres I now add science fiction.

I write from the inside out. That is, I begin with an idea, a theme, and then form a story around that. I attribute this to my training in literature and critique as opposed to creative writing. Sometimes the theme is constructive, that is to say, another armature to compliment setting, character, and plot as a skeleton for a compelling story. Sometimes, the theme is engulfing and desperate, a long-form reach for meaning and understanding. Coronam is the latter. Coronam is my dread of history turning into fear for the future. My questions here address have to do with the individual and the community and the proposition. that society can evolve.

Through the creation of my fantastic worlds, I found not only a better understanding of history but hope for the future. The key, and here is a spoiler I suppose, is knowledge. I believe we already have the other main ingredient to make it work—compassion—or at least we can find it. That is a certainty.

OF KINGS, QUEENS AND COLONIES. Coronam.

A different thing in my writing career. It’s an homage to the great epic science fiction authors of the past, those greats who weened me in the day. Asimov’s FOUNDATION TRILOGY, THE FOUR LORDS OF THE DIAMOND and of course and most importantly, Frank Herbert’s DUNE. Every writer who read these growing up, breeds within them a desire to make their own epic, to join those ranks, to participate in grand storytelling. Coronam is mine.

It is a complex piece, multiple points of view, many worlds, as many weaving plot lines and history echoes all held together firmly by the idea of evolution and new chances. I have a beautiful queen fighting for her thrown and for her people against a rising tyrant. I have a pirate lover sworn to her side; a zealous priest doing God’s own work, however cruel it may be; a doomed colony with good intentions but bad luck; and a child whose suffering turns to enlightenment. These are alien worlds with familiar shapes, people who look different but aren’t. There is environmental danger, human caused and natural. A sun who warms the planets and makes the miracle that is the system, but is volatile, unpredictable, and dangerous.

Now, on the eve of its release I can only hope that it’ll be well received. It is dense, more DUNE than TWILIGHT, if you know what I mean. It flows in longing ideas and evocative prose. It is epic.

I wrote the book because I wanted to read it. That anyone else wanted to, is a bonus. That a fantastic press like Flame Tree wanted to publish it, puts me over the the moon—all of them! It is out of my hands now. I did the best I could and now it stands on its own.

This time the stage is bigger, the distribution world-wide, the fan base potentially global. It’s intimidating. I won’t lie, this book could make me. Or break me.

And anything in between.

All we can ever ask for in life is a chance, right? Do our best and be content? The severing of art from artist which happens whenever a work is finished and released, teaches this lesson in harsh helplessness. The book has its own life now, will have its own fans. We are related but not the same. Our fates will be forever different and yet shared. I have set the solar-sails to catch the storms of the sun. It sails now without me. Others now have the control. But I buoyed in optimism, confident in my team, excited for possibility, and steeling myself for whatever may comes, equally vulnerable to success and failure. I’ve been here before.

Familiar, but new. This is history repeating itself, in micro and macro, fantasy and reality. But this time it’s different. This time it’s bigger. This time the stakes are higher.

OF KINGS, QUEENS AND COLONIES: A Book of Coronam. Humanity gets another chance, but will anything be different?

Thanks for your support.

Posted by Johnny Worthen at 8:48 AM No comments: