I just had F.J.R. Titchenell (Fiona Carter) over to the Blog Mansion last May for the release of her book of Zombie defamation. Now with her husband, Matt Carter, she’s back and libeling shapeshifters.

They dropped in at an opportune time in October just after the Dark Portal in the basement burst open with its annual cries from hell and brimstone smoke, a sign of the season. I let my regular staff off and let the “newcomers” earn their keep.

Johnny: I’d offer you a sandwich, but my staff won’t serve you.

J: Well some of them are zombies, as you can tell, and they’re a little miffed at Fiona for Confessions of the Very First Zombie Slayer (That I Know of).

Fiona: So I took a few creative liberties! Not all zombies are subject to your benevolent rule, you know. Besides, not all the servers are zombies.

J: No. It’s an assortment, but the devils and werewolves, slime monsters and Amway salesmen are refusing to serve you in support of the Zombies.

M: What about those people? They look normal. 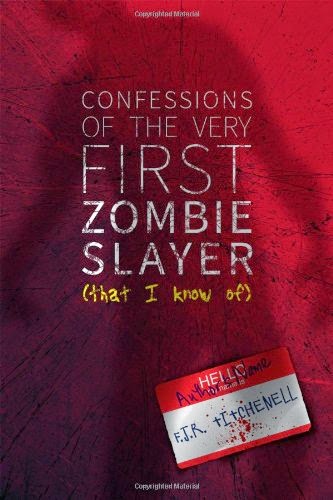 J: Well that works out then.

M: Why are the zombies smiling now?

J: It’s just rigor mortis. So, two books out with Jolly Fish Press this year? Wow. I thought I’d be the first to do that. Who’d you sell your soul to?

F: Other than Jolly Fish Press? Just kidding, we sold to Cthulhu, of course. Best deals on the soul market.

J: You got movie interest in Confessions of the Very First Zombie Slayer (That I Know of) right? Tell us about that.

F: Yes, there’s been interest, in Splinters as well, but we’re currently in that contractual limbo where we’re basically not allowed to talk about anything. Hopefully not forever!

J: I don’t want you to think I’m jealous.

F: Wouldn't think of it.

J: My servers though want to thank you for coming with a little kiss. They’re so sweet.

F: That was creepy. 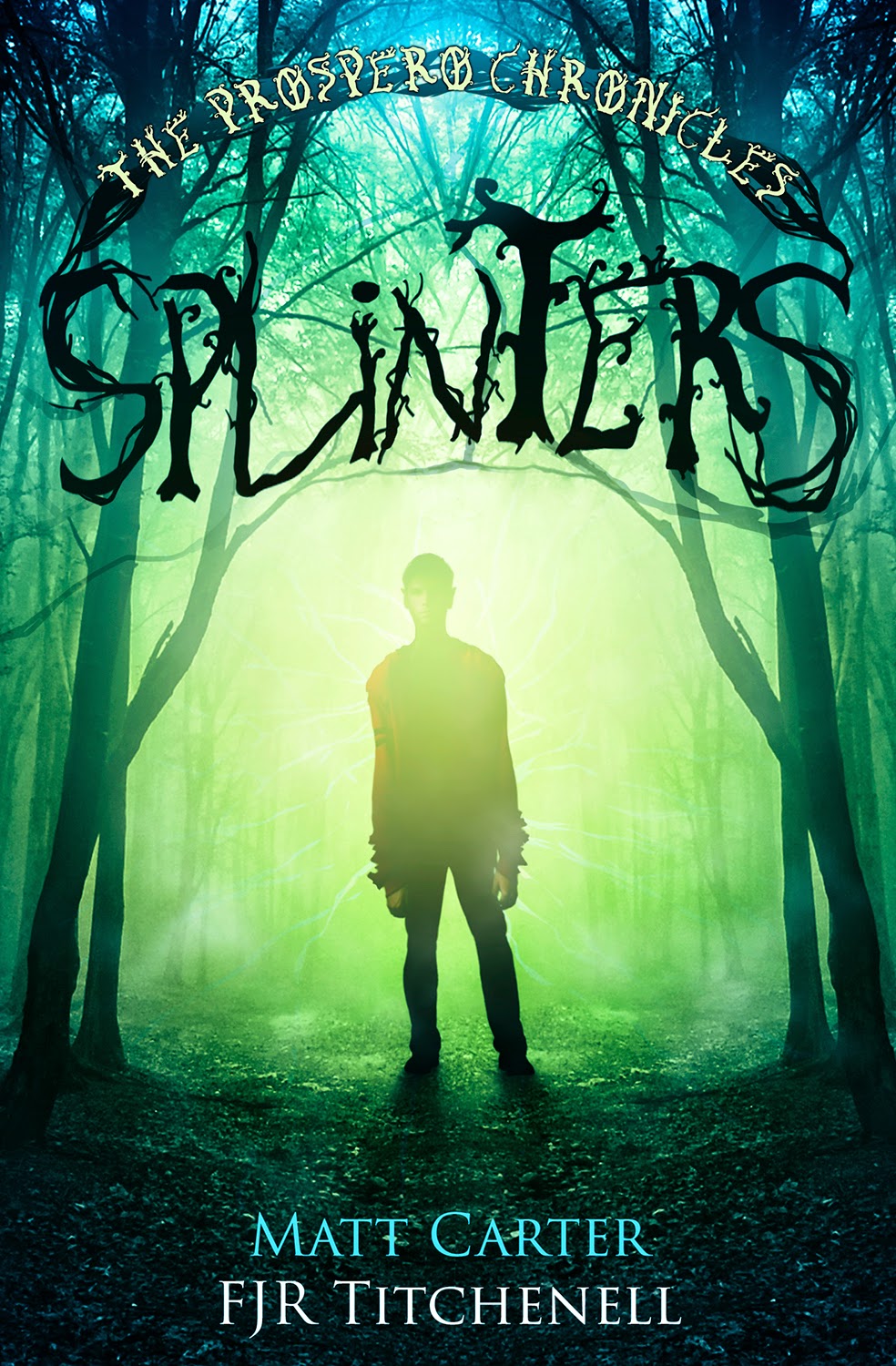 J: Yeah, so now you have a new book out. Splinters, released just last month. Tell us about it.

M: A coupla kids fight a race of shapeshifting aliens in a creepy small town. At one point they chop up a deer and set it on fire. So you can say this book’s got something for everyone.

J: So now you malign shapeshifters?

F: There might be a few Splinters who are misunderstood. We shall see as the clash between our species intensifies. But the way they kidnap innocent humans to steal their earthly lives can’t be overlooked.

M: Only the bad ones. It just so happens that in this book, there are a lot of bad ones.

J: I happen to know a very special shapeshifter who’s lovely and humane, confused and scared and doesn’t like the idea of being hunted down by young adult vigilantes.

F: Yes, I think it’s probably best if we don’t introduce Mina and Eleanor. Any resemblance between her kind and the life-stealing Splinters who plague Prospero is an unfortunate coincidence, but after all Mina’s been through, she might be a little prejudiced. Do send my love, though.

M: Yeah, Mina’s kind of a “burn all the shapeshifters to ashes and ask questions later” type of gal. Ben might give her a chance though, since he’s a nice guy. A little too nice, if you ask me.

M: Strictly? No. But we’ve based it on a number of small towns. Where I grew up, where she grew up, places we’ve seen on road trips, Roswell (which we have actually been to and gotten out of sans a rectal probing), Castle Rock, Derry, Dunwich, Arkham… the list goes on. Like the latter half of that list, Prospero’s one of those places you’ll be glad doesn’t really exist.

J: This is the first of a trilogy – The Prospero Chronicles. How are they coming?

F: We’ve actually got five books planned in the series, though only the first three are under contract so far. We just sent the final edits for book two back to our editor at Jolly Fish, and we’ve written the third but plan to do one more editing round ourselves before publisher’s edits. Since we’re ahead of schedule with Prospero, we’re taking a break right now to work on some separate projects. As for mine, do you have any objection to the disparagement of genetically engineered cosmetic parasites?

M: How about the trials and tribulations of up and coming supervillains? Anyway, where’d the servers go? I’m still hungry.

J: I think they went to the kitchen to have a snack. They get really hungry sometimes.

M: Now the devils are smiling too. And the Amway salesmen.

J: Must be the new lotion. So, uhm, you two are married and write together. That sounds like a living hell. How does that work out for you?

F: It’s actually great. Our strengths are thankfully freakishly complementary. Matt takes most of the world building and outlining (which he loves and I struggle through) off of my plate, and I get to focus on my favorite parts, like properly traumatizing, dissecting, and reconstructing our poor characters.

M: We have a great time writing together. Sometimes, yeah, we’ll disagree, but we’ll talk it out until we do agree and then we get an awesome story finished in half the usual time. And no, all that blinking right now wasn’t me trying to send you a message in morse code saying, ‘HELP, SHE HAS CHAINED ME TO THE COMPUTER CHAIR AND REMOVED MY FEET SO I CANNOT RUN’. One of your servers splashed gravy in my eye, and that stuff burns.

J: It's the slime monsters. They have no dexterity. The others are,... uhm, busy. Who gets the final edit?

M: The fine people at Jolly Fish Press? Well, when you’re talking about the two of us, we tend to bat it back and forth until we’re both happy about it, but since we both tend to notice different things, it still works out pretty quick.

F: Nothing gets through to the final draft until we can both live with it, no matter how long we have to debate it to get it there, but Matt writes Ben’s perspective and I write Mina’s, and for the most part we each call the shots for our own character.

J: Where on the internets can people find out more about you?

F: And Splinters of course is on Amazon and Goodreads …and pretty much anywhere online where books are sold. You can also find out more about how to protect yourself from Splinters on The Prospero Chronicles official website: http://theprosperochronicles.bitballoon.com/

J: I wish you great success and just know that in the end shapeshifters will be shown to be good guys and you’ll name me as the primary inspiration for all your success.

J: Looks like you’ll be here for a while. My new servants will show you to your rooms in the basement.

F: But we have a book tour!

F: And a snake that someone needs to feed!

M: And a kidney transplant!

J: Don’t worry. You’ll make your deadlines and all your appearances. You'll snake will eat and I have a spare kidney in a jar somewhere. We'll look for it later. No one will know the difference.

J: Things are often not as they appear.