Today I invite Mike Cluff, managing editor and co-founder of Fiction Vortex to The Blog Mansion to visit the Dark Portals in the basement.

Johnny: I’ve had the first one for a while. I don’t remember it during the Realtor walk-through before I bought the place, but after a few weeks, after a few parties, rituals, and sacrifices there it was right there. It’s seasonal and comes and goes. Now there are the new ones.

Mike: Have you called an exterminator?

J: Yes. Several times. I send them down here and never see them again. By the way, want to buy a van?

J: Smell like chemicals and have a big plastic bug on the top.

J: So what do you think?

J: I just thought since you were at Fiction Vortex you knew about this stuff.

J: What is Fiction Vortex exactly if not a whirling hole into a different and possibly hellish dimension?

M: Hellish is such a subjective word... And it's not dimension, it would be dimensions, plural. Fiction Vortex is a doorway to multiple universes. We call them 'serial boxes'. They're unique, collaborative, creative spaces that release fiction in multiple serials, each of which contains multiple episodes. We've found two of said shared universes or serial boxes and have more in sight. It's almost like Netflix married your favorite bookstore. There are so many stories, it will make your mind melt. So, not exactly hellish.

J: I was thinking it was another name for a slush pile.

M: That's what we tell our interns. It's sort of like a safety blanket for them. 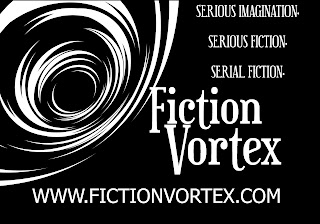 J: How long has Fiction Vortex been around?

M: Well the original Fiction Vortex opened in 2013 as a short story magazine, but it fluctuated, and proved unable to sustain itself . Through our serial boxes approach we are creating a new approach for authors to publish their work.

J: What kind of things do you publish?

M: Basically all genres contained in the speculative fiction spectrum. Our masthead states: Serious imagination, serious fun, serial fiction for the digital age. It's all in serial/episodic format. Each serial will have at least six episodes, and the episodes range from ten to twenty thousand words, or about forty pages.

J: How often do you publish Fiction Vortex? 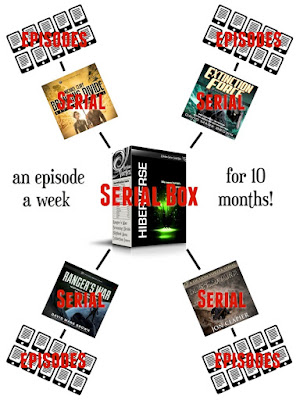 M: Right now there are two active serial boxes, so once things go into full speed in September, we will produce two episodes a week. Every first episode of each serial is free--readers try it out and then see if they want to pay a buck for each additional episode.

M: The co-founders, David Mark Brown, Jonathon Clapier and myself, to name a few, are writing the first serials. We are seeding the first two serial boxes, and will open these shared universes to other authors through a submission process. We want to prove the business model, show that we have a solid base of paying readers. Then when new authors come along, they already have an audience in the Vortex.

J: That sounds like a much safer thing than my spiraling doorway to the abyss.

M: Probably, but we sill have problems?

J: I was being sarcastic.

M: It’s hard to tell with all the howling portals.

J: What can my readers do to help?

M: We need to get the word out about Fiction Vortex and its serial boxes.  Serial fiction isn't new, it's just new in this day and age. People binge on TV episodes, so why not written episodes? That is how Dickens did it. So, yeah, we need people to get sucked into the vortex and bring their friends along for the ride. If your readers could shout out on the rooftops about this new/old idea, that would be amazing.

J: You should do a kickstarter.

J: Where on the internets can peeps find out more about Fiction Vortex and the campaign?

J: I think my portals like that idea. They’re really moving now.

M: Are those your exterminators climbing out?

J: Might be. I can’t remember them all. Might be the gas people, or those salesman who woke me up from my nap that time.

M: Maybe he’s from another dimension?:

J: I think they are.

M: How can you tell?