Today at The Blog Mansion I welcome author Jason King, who’s celebrating the release of his new book. THE SOULLESS GRAVE.

Johnny: THE SOULLESS GRAVE is a great title. I assume it’s a collection of essays about the state of the Republican Party in America.

Johnny: Fantasy. Right. Sounds like the GOP to me.

Johnny: That’s kind of a broad brush, but I don’t know about everyone’s personal habits. If you say the GOP is high, then I’ll go along.

Jason: No, the book. THE SOULLESS GRAVE. The series. It’s fiction.

Johnny: You didn’t back up your essays with factual sources? I’m disappointed.

Jason: It’s a fantasy series, like LORD OF THE RINGS, and George RR Martin’s SWORDS OF FIRE AND ICE. Mine is called THE AGE OF INFINITE series. It’s not about contemporary politics or parties.

Jason: Really. Now do you understand?

Johnny: Oh. Well after that last debate you can see why I’d think It was about the GOP. Plus your first book is called LURE OF FOOLS. It was an honest mistake.

Jason: Do you do any research before these interviews?

Johnny: Sure I do. Look at this list of questions I prepared. Probably have to throw them all out now.

Jason: Here’s a catalog page. It may help. 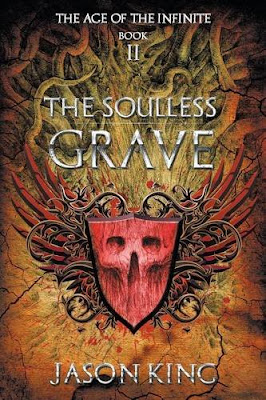 Johnny: Okay. Well, maybe I can salvage a few questions and we can still have the interview.

Jason: It’s about a land called Shaelar where class distinction is largely based on ownership of magical artifacts called “talises.” These talises are powered by enormous crystal monoliths called Apeira wells, and mankind has built their cities around them.

Johnny: How would you describe your first administration, I mean book, A LURE OF FOOLS?

Jason: ..…A face paced action adventure with lots of magic and excitement. In it a peasant named Jekaran gets ahold of the most powerful talis in the world; a sentient sword that turns him into a super hero.

Johnny: Getting into THE SOULLESS GRAVE, Kairah, with oracular powers, has a vision of a wasteland. How do think this vision will play with the voters?

Jason:  Well Kairah’s vision is of a wasteland that is humanity’s past and Shaelar’s future. So I think the only one who would vote for that would be a Libertarian.

Johnny: What are Ezra’s views on renewable energy? 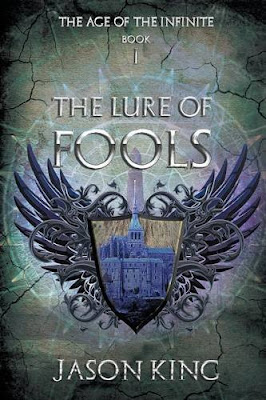 Jason: I’m not sure that question applies….

Johnny: How would you reply to the allegations that Jekaran is just tool to further a Koch Brother funded plutocracy and The Eater’s evil plans?

Jason:  What do the Koch brothers have to do with my book?

Johnny: What limitations do you see needing to be put in place to protect the world from the Sword of Invincible Shadow?

Johnny: Another dodge I think my readers can see though your propaganda. What kind of spin can are putting on Ezra’s connections with the Rikujo crime syndicate? Don’t you think his links to organized crime automatically make him unfit to govern, er, I mean, be a lead character in your book?

Jason: Well at least you’re trying….Ezra regrets his time in the criminal syndicate, and has tried to reform his life. That’s why he became a farmer. Like all of us he has regrets, and is trying to make things right by changing himself.

Johnny: Do you think there should be Fourth Amendment limits on illusionary spell craft surveillance employed by Jenoc?

Jason:  What the hell, Johnny!

Johnny: It's not like I can't find out. I'll just check your email logs for that one. So.. uhm, what bold ideas does your book put forth to guarantee peace in our time? What guarantee do we have that there will not be another talis war on Shaelar?

Jason: War is always a possibility.

Johnny: Argentus faces multiple warrants and is considered by many to be a brigand. How can you justify having him as part of your campaign—I mean, book?

Jason: *sigh* Like with any good story, internal conflict makes for interesting characters.

Johnny: What can we look forward to in Book 3? Will the King of Aiestal finally propose universal health care?

Jason: Book 3 will be the finale, but I can’t say much more than that without spoilers. As for universal health care? Let’s put it this way, the king owns slaves and isn’t much concerned with the health of his people.

Johnny: I know the type. How did you first break into being an author?

Jason: I pitched to James Wymore at LTUE, and he liked my manuscript. Before that I had lots of setbacks and rejection. 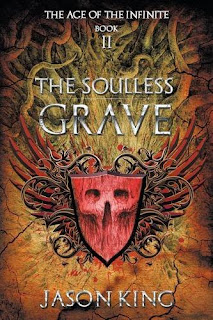 Johnny: Tell me about your relationship with your shady SuperPac, I mean publisher, Curiosity Quills?

Jason: CQ is a fast growing mid-size press that was founded by authors, so they are very author-minded in their contracts and service. They’ve been good to me.

Johnny: Where can likely readers find out more about your platform?

Johnny: Cool. See how slick that was? I just had to switch around the questions a little bit and no one will know there was any confusion at all.

Posted by Johnny Worthen at 8:53 AM