Eric Bishop has a pistol

New author Eric Bishop, the pen behind The Samaritan's Pistol, joins joins me at the Blog Mansion with Sal, “The Saw” Sarducci, well dressed restauranteur and pinky-ring wearer.

Johnny: Sal. Sal "The Saw" Sarducci. He was just curious about your book and asked to be here.

J: I couldn’t refuse. Tell me about The Samaritan’s Pistol - give me your elevator pitch.

E: My story is about a wilderness guide who interrupts a Mafia hit in the woods.

J: Sounds like a page-turner. What’s the key to writing “action” books.

E: Everything starts with character. Nobody wants to see the Dali Lama fight the Girls Scouts. Who better than iconic bad asses like cowboys and the Mafia? Beyond that it’s about picking the right subject and verb, then moving on to the next sentence. 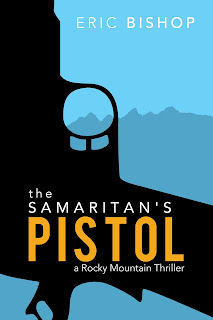 Sal the Saw: What? No experience? Thought so!

J: So it’s a contemporary western. How have you linked that tradition to the modern world?

E: The easy answer is horses. I horse pack for a hobby into some pretty rough places. It’s still done the same way it was centuries ago. You put shoes on horse’s hooves and go for a ride. The only difference is trailering the ponies to the trailhead.

Sal, the Saw: I’m more interested in talk about the money.

E: Who are you again?

Sal, the Saw: Never mind that. Tell me about the money.

J: Yes, how did you come up with the villains of your story?

StS: And what’s this about hijacked mob money? Whachu’ know? Who ya’ talkin’ to?

E: Pure speculation Sal, That and touring the Mob Museum in Vegas.

StS (under his breath): Amateur.

J: Yes, anyway, Eric, tell me about guns. What’s the appeal? How do they play in your novel?

E: I Had a few lessons from a certified combat pistol instructor a few years ago. The guy was in the special forces at the time. My brother knew him and set it up. The first question this decorated soldier asks me is, “ You wannna learn to shoot targets or people?”
“Um Targets”
“Wrong answer!” the guy was in my face. “The only reason to have a handgun is for killing people!”
I wasn’t about to argue. It’s fun. I’m pretty good but only at shooting targets. My protagonist is a lot like the guy who taught me.

J: So violence is a solution?

StS: Depends on the problem.

E: What was that Sal, couldn’t hear you . Too much target practice without earplugs.

StS: You messin’ with me?

E: Nah. I agree. Violence. Depends on the problem.


J: What’s your day job? I heard something about a ranch.

E: The ranch is all hay and horses at this point. I make my living as a financial planner. The ranch is really just a hobby.

E: There’s some places we could go shoot pistols and not be disturbed. Wanna lesson?

StS: Nah. I got the shooting down. It's what to do with the targets afterward I'm thinking about.

J: Describe your journey from writer to author. How’d you get it done?

E: It’s all about writing, critiquing, and reading authors who are better than me, which was pretty much everybody when I started. Over eight rewrites, I took The Samaritan’s Pistol from 150,000 words down to a trim 85,000.  I had no idea what active and passive voice were. I was lucky enough to find a critique group through the League of Utah Writers that helped me through all my beginner mistakes.

J: I understand The Samaritan's Pistol is the first of a series of books - The “Rocky Mountain Thrillers.” Congratulations.

E: Thanks. I love the west and have always wanted to see more stories written with The Rockies as the backdrop.

StS: I hope you have better sense in later books about who you choose to slander. 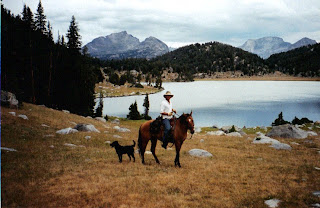 StS: You messing with me again?

J: Moving on. Eric, who besides me and my upcoming debut release BEATRYSEL, have influenced your writing?

E: It’s more a matter of who hasn’t influenced me. I’m a sponge when it comes to whoever I’m reading at the time. Right up there with you, Johnny Worthen would be Stephen King's Under the Dome, All the Pretty Horses, by Cormac McCarthy, Craig Johnson’s Walt Longmire series, and Andrew Smith’s Passenger and The Marbury Lens to name a few.

J: August company. Where on the internets can my peeps find you? 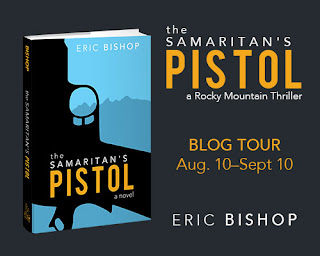 E: Sure thing, Here’s the links:

StS: Sounds like you’re going to be a great success. What are you going to do with all the money you make with your books?

E: At this point it’s all fun. If I make enough money, to go to the Maui Writer’s Conference and expense it all as an author, I’ll die happy.

StS: Die? Did you say die? Have you considered buying an insurance policy? You have nice legs, be a shame if something were to happen to them. I’ll be by every Thursday.

E: Check that. I need to make enough money to hide from Sal. A little plastic surgery, and pay a hacker for a new identity.