It’s springtime at the Blog Mansion and the chicks were just hatching when author Eric S. Brown arrived to help me sex the chicks.

Johnny: I have no idea what I’m doing.

Eric: Unless you have an expert, I think you have to wait until they’re older.

J: You know, I don’t know why I care what their sex is anyway. Really. It’s none of my business.

E: You have rabbits too, huh.

J: Yeah, I painted one green for you.

E: That’s cool. For my book Jack Bunny Bam-Bam and the Weeper Apocalypse

J: Yes. I taught him how to use a gun and made him a psychopathic killer. Take him he’s yours.

E: I would have went with something bigger.

J: When he's older. You have a thing about taking cute cuddly creatures and turning them into killing machines. Before we get into your defamation of Big Foot, what do you have against bunnies and cute innocuous things in general? 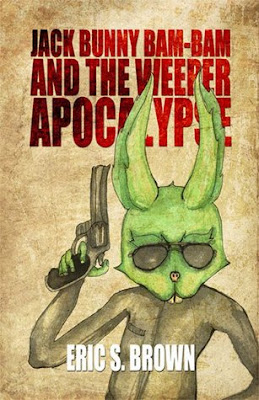 E:  Ha.  I don't know that I have anything against cute and cuddly creatures.  I just go where my muse leads me.

J: Gotta say that character threw me for a loop. Hard core. The weepers were brilliant in that book. Where’d that come from?

E:  I was trying hard to think something odd to do with zombies and they how they spread their infection.  I remembered the scene in 28 Days Later

where the father is infected by a drop of blood falling into his eye.  I had always enjoyed that scene.  So I took it one step farther and created zombies who spread their diease by tears.  I also wanted to make the zombie sort of creepy so they howl and cry all the time, nonstop.  One would never want to be stuck in a barricaded house surrounded by Weepers.  The noise would drive you mad.

J: I’d assumed you had a girl friend who cried a lot.

E:  Nope. I do have an awesome wife though.  She doesn't read my stuff because it's usually so disturbing but she is very supportive.

J: So I watched Harry and the Hendersons

to get ready for this interview. Then I scanned your Big Foot Wars books. Did you not get the memo?

E:  I saw that movie too as when I was younger but let me tell you, growing up in the rural south, one doesn't, or at least I didn't, envision Bigfoot was friendly.  Apes scare me to death and what is Bigfoot but a giant with superhuman strength who could easliy tear you apart if he got mad?  I had dreams as a kid about Bigfoot in the woods outside my home waiting to eat me.  After years of writing zombie books like Season of Rot, I wanted to try something different in terms of horror and I remembered those dreams. I took Bigfoot and made him an apocalytpic monster like zombies.  Bigfoot War is the tale of one town, populated by about 800 people, who accidently set into motion as course of events that leads their town to be attacked by dozens and dozens of angry Sasquatch bent on revenge.  It's survival horror, Bigfoot style. 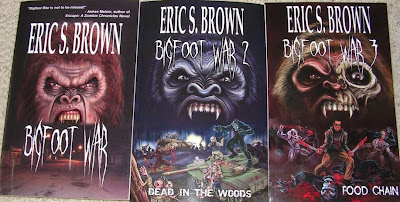 J: You’re up to the fourth installment of Big Foot Wars. Tell me about the series.

E:  Actually, there are seven on the market as of now.

E: Four books are from Coscom Entertainment and three I have self-pubished.  The first three from Coscom build the tale of a Bigfoot Zombie apocalypse that by its end spans the entire globe.  The fourth book in the Coscom series is a prequel that crosses over with my A Pack of Wovles series from Grand Mal Press.  A Pack of Wolves is a series about a family of Old West gunfighters who happen to be werewovles.  The three Bigfoot War books I have self-published are Bigfoot War: Frontier

, which is an expansion book to Bigfoot War 2: Dead in the Woods

, and Bigfoot War: The End

that wraps up the series Military SF style in the far flung future.

J: Big Foot is usually a Pacific Northwest American folk tale, yet you set your series is set in the south. You pulling a fast one us?

E: What was that? 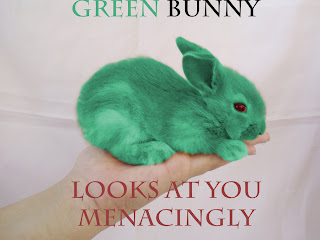 J: The rabbit’s taking pot shots. He does go through ammo. Don’t dodge the question. Big Foot in the south? Come on.

E:  No, I am not pulling a fast one.  There are indeed Bigfoot sighting all over the south.

J: You're making that up.

E: No really. Lots of sightings.

J: Do you still have dry counties down there? Illegal whisky stills and all that?

J: Okay, I believe you about the Bigfoot sightings. You write novellas, I see – short reads, ideal for Kindle readers. Have you ever gone long form?

E:  Actually, I write novella because it's my perfered form.  It's easier to tell a gripping, super fast paced, heart-expolding horror tale without getting bogged down like you would in a novel in a novella.  And yes, I have done two longer books: The War of the Worlds, Plus Blood, Guts and Zombies

for Simon and Schuster because I was asked to rewrite the classic into a modern Z tale, and Homeworld

which I wrote with the talented Tony Faville is my first venture into a true Hammer's Slammers/Honor Harrington style Military SF book.

J: What genre would you say your write? Cuddly-creature turned killer?

E:  Over the years, I have mainly written horror.  Jack Bunny Bam-Bam

was my first Military SF one.  Right now, I am scripting superhero comic books for Unstoppable Comics and itching to do some more Military SF.

J: How’d you get started in this business?

E: I grew up a comic book geek that would put Sheldon on the Big Bang Theory to shame.  I lived and breathed comics.  That led to discovering other things like horror films, Military SF books, and Star Trek.  I still love all those things.  I always wanted to be a writer but never had faith in myself.  Finally, when I got married, my wife told me to give it a go.  I sent out a story and it sold to two magazines off the bat.  I gave it to the larger one and quickly did a second tale for the other mag.  From there, it just kept going.

J: How do you see your career now?

E:  I feel very blessed for what success I have and plan to keep on writing as long as I am breathing.

J: Do you have an agent?

E:  I do.  He handled my deal with Simon and Schuster but honestly I just mainly work on my own.  I see myself as an indie author because I write the kind of stuff I like to read not what the big entities in Hollywood, etc. flood the market with.

J: You’ve got quite a list of books out. Who’re your publishers and how’s that working out?

E:  Man, I have too many to even begin to list but I'll try to name some:  Simon and Schuster, Coscom Entertainment, Permuted Press, Unstoppable Comics, Severed Press, Evolve Ebooks, Bizarro Pulp Press, Grand Mal Press, etc., etc.  Pretty much all of them have been great to work with in their own ways.

J: What are you working on next?

E:   I haven't decided yet but I will let you know when I do.  Seriously, I really want to write more Military SF as that's the genre my hero, the man who taught me how to write, David Drake does, and more comics than just the two series I am working on now for Unstoppable but we'll see where God leads me.

J: Where can my readers find you on the net?

Posted by Johnny Worthen at 9:54 AM