Johnny: Seriously? The Monkees over The Beatles? Were you dropped as child or what?

Jennifer: Sorry, but “I’m a Believer” found me early. I didn’t care who sang it – I just loved the song. Besides, I have a nasty habit of falling for the band/book series/food product/TV show that no one else likes. If I’d loved the Beatles, Paul McCartney would have had such a disastrous late-career popularity slide that he’d have to get a second job at the local Tesco.

Johnny: I'm underdog fan too. But “The Pre-Fab Four” versus “The Fab Four….”

Jennifer: Hey, there’s not an ounce of genuine food product in spray cheese, either. That doesn’t mean it’s not delicious.

Johnny: Okay, I can Let it Be, We Can Work it Out. Let’s forget about music for a minute and talk about books. I’ll just put the stereo on shuffle. 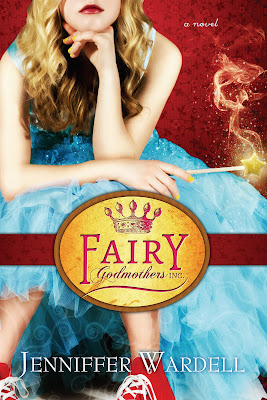 Johnny: Seemed appropriate. So you write about fairies. Are yours the Disney

pest type, or the sword-wielding dangerous type like in Wizards

Jennifer: Depends on the personality of the individual fairy. I’m sure some of them wield swords, but there are also others who feel that a “true” fairy needs to be out in nature communing with the flowers. Since no one’s figured out what “communing” actually entails, these fairies tend to embarrass themselves pretty frequently.

Jennifer: Why do fairies randomly hunt up poor girls and send them off to royal balls? Because they get paid for it. Kate Harris is one such Fairy Godmother, and actually tries to help her clients find a little happiness in the middle of the sparkles and slow-mo dance sequences.


When she meets Jon, a nice guy who understands all about paperwork, she thinks she might have found her own happily ever after. Then an inappropriately-placed self-help book sends her current assignment sliding straight toward disaster, and Kate has to figure out how to make everyone’s wishes come true.


Johnny: What genre is it?

Jennifer: Fantasy/romance/comedy. If I’d stuffed in one more genre, I would have had to pay a fine.

Johnny: It’s a great premise. Funny and clever. I Got a Feeling The Two of Us can Come Together Here There and Everywhere about funny books. Where did you develop your sense of humor?

Jenniffer: It’s all my family’s fault, really. When we get together we mostly speak in witty one-liners, and if you can’t keep up it’s really hard to get a word in edgewise. Also, I think we’re a little bit competitive about being able to make each other laugh. I’m especially proud when I can get one of my brothers chuckling.

Johnny: It’s All Too Much. Tell me about being an entertainment journalist. Is that your day job?

Jenniffer: Yes. I’m a arts/entertainment/fun feature-related stuff writer for the Davis Clipper. Since it’s a weekly newspaper, I’ve become an impromptu expert in everything from painting to museum exhibits to gardening tips. I love every minute of it, though I could probably get more money by getting myself a nice cardboard sign and setting up shop in a corner of the Walmart parking lot.

Johnny: It’s my patented question: How did you get from writer to author? What was your Long and Winding Road to publication?

Jenniffer: Writing. Lots and lots and lots (repeat for about 50 more pages) of writing. Sending out query letters and manuscripts to pretty much every publisher and agent on the planet. Cry when I got the rejection letters back. Plot a lot of painful deaths. Consign my first novel to the pits of shame. Rewrite the first half of the second one from the ground up. Repeat the first five sentences 30 or 40 more times. Get the e-mail from Jolly Fish. Try not to hyperventilate from joy.

Johnny: That's how I did it. How long did it take you to write Fairy Godmothers, Inc.

Jenniffer: I stopped counting after a decade. I promise my current novel won’t take me as long.

Johnny: I Want to Tell You that your book is great. I know Money Can’t Buy Me Love, but It Won’t Be Long until you’re famous, and Baby, You’re a Rich Man, When I’m Sixty-Four, will you still be In My Life? 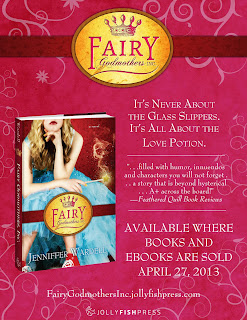 Johnny: Okay, that was a long one.

Jenniffer: I Want To Tell You You Know my Name (Look up My Number).

Johnny: Oh Darling! Everybody’s Got Something To Hide Except for Me and Monkey.

Johnny: Okay, I’ll stop. This is The End.

Johnny: Will there be sequels to Fairy Godmothers, Inc.

Jenniffer: Ahh. You better Run for Your Life.

Jenniffer: I’ve currently working on an outline for the sequel for “Fairy Godmothers,” but at the moment I’m finishing up Dreamless. Think of it as Sleeping Beauty, Jenniffer style.

Johnny: Who, besides me, are your favorite authors?

Jenniffer: I bow before the awesome majesty that is Terry Pratchett

. I’m not worthy to kiss his boots.

Johnny: What books would you say are like yours?

Johnny: Where on the internet can the cool people who read my blog find more information about you?

Johnny: Thanks for coming to The Blog Mansion.

Jennifer: I Should Have Known Better.

Johnny: You are a Daydream Believer.

Jennifer: I gotta go. I have to catch the Last Train to Clarksville.

Johnny: Do you have a Ticket to Ride?