Author Neil Davies dropped by the Blog Mansion the other day. It was a lovely spring day, the daffodils were popping up in the garden and the peacocks were doing their peacock thing. The free range scorpions were scavenging for grubs under the play structure, while the wolves rolled in the sun. The snow was gone, revealing the winter’s ravages upon the property. I set the servants to pull the bodies out of the maze, swimming pool, wading pool, shark pool, dolphin pool, snake pit, worm pit, bottomless® pit, moat, wall, fence and minefield. It was a perfect day for yard work.

They had a pretty good pile going by the time Neil showed up and I was worried we’d run out of kerosene. I offered him a mint julep and sat with him on the veranda.

Johnny: I hope you didn’t have trouble finding the place.

Neil: No I followed the smoke from those burning bodies and drove right to it.

N: Are those people in costume?

J: Those must be the Schneiders. I wondered what happened to them Halloween.

I called down to Trevor, my snake master, to make sure he check those clown pockets for eggs before adding them to the pyre. Baby rattlers are pricey, but restocking the Cobras could break me.

N: It started life a few years ago as a short story, published by the Canadian publisher Eternal Press. Then people started wanting to know what happened next so I ended up expanding it into "The Novel".

J: Oh, so you stole the idea. It’s plagiarism. Are you not aware of copyright law? Intellectual Property restrictions? For god’s sake man, have you no respect for others’ work?

N: If it makes any money I'll be sure to sue myself.

J: What is Hard Winter, the Novel about?

N: It's about an average guy, Norman Leonard, who's just trying to get by with his wife in this new ice age when the shit hits the fan, or the ice hits the blizzard or whatever analogy works! Basically there's a tidal wave and something's coming, something other than the glacier that already covers Scotland, and he has to make a run for it. From there things just get worse and, without giving too much away, there are more dangerous things than blizzards and glaciers chasing him.

J: Do you see it as a political book, global warming issues being so hot right now?

N: I'm not big on 'message' books. This is an adventure, with a bit of horror and science fiction thrown in for good measure.

J: Man versus nature. Your villain is a glacier. Not a lot of dialog I take it.

N: It's slow, but it gets its point across eventually.

Across the croquet field, beyond the badminton courts, a crane lifted a brown UPS truck out of the pond. Its sides were crushed and pockmarked by ragged circular bites.

J: I don’t know. Miskatonic University leased if for an experiment, somebody mentioned ducks, I think.

J: Tell me about being a short story author? Does it pay? What are the benefits?

N: I'm sure it can pay but I've just not been doing it right. Actually I find short stories difficult to write, good ones anyway. I can turn out as many crap ones as you like no problem.

J: Tell me about transitioning from short stories to fiction?

N: You do know Hard Winter: The Novel is my fifth novel? In fact writing novels has always been my first love, but short stories tend to be quicker and are good to start getting your name out there.

J: Yeah, but you've had so many short stories published: twenty-eight according to your site. That's, like a lot. Tell me how you got to be published in the first place. Did your short stories lead you to a publisher or did you have to query. Tell me your journey from writer to author, having a story to having it in print.

N: Okay, so you want the boring stuff. I can do that. I've always written for as long as I can remember. When I was about 9 or 10 years old my teacher used to get me to read out the stories I'd written in class to the other children because she thought they were good. That was the first time I realised other people might actually like some of the stuff I was writing. I taught myself to type on my Dad's old typewriter (because my handwriting has always been appalling) and when my parents bought me my very own typewriter (I think it was a Petite model in its own little carry case) I set up in the garden shed and wrote in there. What I never had was any real self confidence so I never did anything with all those stories. It really wasn't until I met my wife and she started pushing me that I started to send stuff off. No one was more surprised than me when people actually liked it - in fact the very first short story I sent off was to a competition and it won! That was The Midnight Hour. Sorry, this is going on too long. Let's quicken it up a bit. So, some of my stories were published in a free PDF magazine called Estronomicon published by Screaming Dreams in Wales. Steve Upham of Screaming Dreams then decided to go into book  publishing as well and approached me about doing a collection of short stories to be the first Screaming Dreams book. That was the book The Midnight Hour, published in 2005. Since then I've had more short stories published and have put out some work through Amazon's kindle publishing myself. My latest release, as you know, is Hard Winter: The Novel, published by Omnium Gatherum. 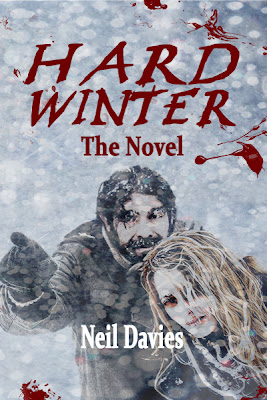 J: Like me, you’re working with several publishers. Who’s your favorite?

N: Because I have the strange desire to continue being published I will gracefully decline to answer that.

N: I've found working with Omnium Gatherum to be a really interesting and enjoyable experience. Kate Jonez worked with me as Editor on Hard Winter: The Novel and I have no doubt that her input improved the book. That said, she was always gracious enough to step back if I felt strongly enough about something. That's the kind of Editor I like to work with - one who has some great ideas and suggestions but never forgets whose book it is in the long run.

J: You know they’re going to publish my debut, BEATRYSEL in September. How excited are you to read it?

Neil at this point only smiled. Rather than add him to the pile, I took his expression to mean: “I am so excited that I am speechless with anticipation. The blood circulation in my legs and head has ceased to send blood to other areas which more aptly describe my feelings toward your upcoming book release. It will shake the very pillars of literature for generations to come.”

J: Who besides me are your favorite writers?

J: Do you have an agent?

J: I love your book trailer. How’d that happen?

N: I'm very lucky to have as a good friend Mr. Tony Longworth, who as well as being an award winning film music composer, multi-instrumental solo performer and founder of and bass player in Morbid Symphony and Flesh-Resonance, also makes amazing book trailer videos. He was kind enough to put this one together for me. He also did the one for my first short story collection, The Midnight Hour. Don't you hate people who do all sorts well? Pay a visit to http://www.tonylongworth.com to find out more.

N: I need quiet and solitude. I envy people who can sit in a crowded room/bar/café and write. I can't even READ in places like that, let alone write! I have to lock myself away upstairs in front of the computer and make myself start writing. Once I've started it's usually okay, but I'm a past master at prevarication. Anything to put off actually having to think of the words. Sometimes I have notes or a rough plan to work to, but mostly it's held in my head and happens as I type. If I'm lucky I'll have an idea where it starts and sort of know where I want it to go, the rest is where the fun comes in.

J: What is it about living in the north of England that makes people write scary stories?

N: Have you ever been to the north of England? Scary stories come naturally! Plus we can people them with well-off people from the south of England and kill them off without the police getting upset. In other words, I've no idea.

J: Man that pile is getting high. Those Jehovah Witnesses, Mormon Missionaries, canvassers, and lawn care guys I don’t care about, but a whole troop of Girl Scouts? That hurts. Maybe we can recover the cookies. It’s never been this bad before. Don’t people read signs?

N: I didn’t see any signs coming in.

J: No? Nothing about “Danger Deadly Blog Mansion Ahead?”

J: Oh. Well that explains it.

N: It was a hard winter.

J: I see what you did there! Tell me few but growing minion readers where they can find you on the internet