On my nervous way to StokerCon™ 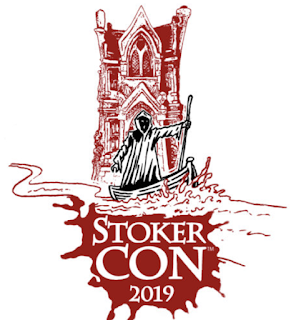 Hey kids, sorry to miss last week. I’ve been busy. Not much to show for any of it. Yet, but it’s coming.

I write to you today from a friendly but bustling concourse at Salt Lake International Airport. I’m on my way to StokerCon™ (remember the ™ or they’ll mess you up.) I’m going this time as an editor Omnium Gatherum Media as well as an author. I'm presenting three classes and taking pitches like Johnny Bench.

It’s in Grand Rapids Michigan. I’ve never been to Grand Rapids before. Or Michigan. My first impression is that it’s removed. I couldn’t find a direct flight. I’ll be visiting Detroit in a few hours. I’ll look for Tigers and Elmore Leonard references.

I hear there’s a Lyft and Uber strike, so my already late arrival will probably be later still. Taxi it is. I don’t cross picket lines. Not me. Neither should you.

This will be my second StokerCon™. The last one I was at was in Long Beach, California, aboard the Queen Mary. I met George R. R. Martin that trip. It was pretty great. The whole con, not just the ten minutes I talked to the Game of Thrones God. I’m looking forward this time to meeting new people and reacquainting myself with some horrible writers. It’s a horror writers conference. Get it?

I’m a little nervous about the trip. Flight included. Airline travel used to be fun. I’m old enough to remember that time. I’m old. It’s a trial now. Half an hour to have TSA question my choices of pumpkin seed brand. Twelve dollars for a three dollar salad and boarding forty minutes before the pilot comes out of the bar.

I’m flying mid class, called Comfort Plus because middle-class sounds too middle middle class. I board right after first class. So we’ll be the first to run the gauntlet, since they’re up front. They get to sit and pass judgement on my class and the economy people, thinking we’re peasants but trying hard as hell to avoid eye contact.

At the conference there’ll be no class. I’m going.

Okay. The nervous blog must end.

I’ll report an interim blog report if the occasion warrants . In the meantime, look for me by the big lakes.