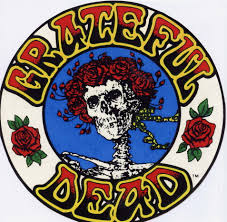 Today’s a holiday for some people. Underground and subversive, spoke of in gasps as one tries not to exhale. And on this day I find myself in Las Vegas and my thoughts naturally turn to my youth when I explored this city with rock and roll ringing in my ears, chemicals in my veins, and the words of Hunter S. Thompson gathering that energy together, focussing it, and fixing it into an idea transcendent of my own experience and time.

An entire generation joined the good doctor on his journey of self and social discovery. These were the wide-eyed and cynical counter-culture revolutionaries who bought a ticket and took the ride. He took them to the edge, or at least showed them the way. I discovered him late historically, but personally, he arrived at the perfect time.

My brother McKeen had introduced me to Hunter S. Thompson,  but it was my peers who gave him life. Like a debauched book club, my group of friends all read Fear and Loathing in Las Vegas one year in preparation for our annual pilgrimage to see the Dead down there. The book, like those pilgrimages, changed my life.

My speed has changed since those days. This trip to Vegas is not fueled as before with drugs whose name it is illegal to speak in most places or with the friends who shined with me, but aren’t with me, and some who never will be again. But I remember and I will miss them all and wish I could have my youth again—not to change a thing, but to make more of the days that were the exception to "normal," because those are the days I remember. Those are the days whose fire still flares into flame and in whose hot embers I test all I know and want. 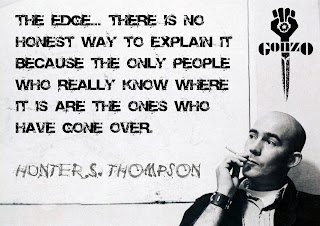 Today, now, here in Vegas–underbelly of the US, I particularly miss Thompson’s wit and clarity. I pray that somewhere now in our current social crisis there is a voice like his rising to light the way, a voice of the authentic and debached. A insane voice of reason in madness.

If there is, I bet that voice knows what day it is.

Today, in Vegas, I will l drink Kentucky bourbon in honor of Kentucky’s son. I will worry about the future, of politics and the planet. Of human rights and insatiable greed. I will think no one has ever had it as hard as we have now. I will lose hope, and then I will climb to a high window, or find a hill, and using eyes Hunter shaped, I will peer west and and remember this passage: 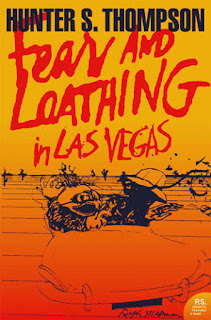 “Strange memories on this nervous night in Las Vegas. Five years later? Six? It seems like a lifetime, or at least a Main Era—the kind of peak that never comes again. San Francisco in the middle sixties was a very special time and place to be a part of. Maybe it meant something. Maybe not, in the long run . . . but no explanation, no mix of words or music or memories can touch that sense of knowing that you were there and alive in that corner of time and the world. Whatever it meant. . . .

History is hard to know, because of all the hired bullshit, but even without being sure of “history” it seems entirely reasonable to think that every now and then the energy of a whole generation comes to a head in a long fine flash, for reasons that nobody really understands at the time—and which never explain, in retrospect, what actually happened. 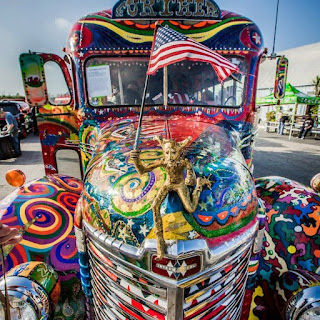 There was madness in any direction, at any hour. If not across the Bay, then up the Golden Gate or down 101 to Los Altos or La Honda. . . . You could strike sparks anywhere. There was a fantastic universal sense that whatever we were doing was right, that we were winning. . . .

And that, I think, was the handle—that sense of inevitable victory over the forces of Old and Evil. Not in any mean or military sense; we didn’t need that. Our energy would simply prevail. There was no point in fighting—on our side or theirs. We had all the momentum; we were riding the crest of a high and beautiful wave. . . .

So now, less than five years later, you can go up on a steep hill in Las Vegas and look West, and with the right kind of eyes you can almost see the high-water mark—that place where the wave finally broke and rolled back.”


That always gets me. I take hope from it and with the right kind of eyes, it makes me search the horizon for the next wave.

Posted by Johnny Worthen at 9:44 PM