Horror writer Tommy B. Smith drops by the Blog Mansion for some Poisonous talk.

Johnny: I have to admit I don’t know much about Arkansas. I think my great-grand parents are from there. Oh, and I was in Li’l Abner in school.

Tommy: Western Arkansas is much like eastern Oklahoma — lots of trees, unpredictable weather — but without the casinos.

T: Once upon a time, I might have loved this, but right now I think it’s beginning to burn a hole in my stomach.

J: Maybe it’s the crowd I hang around, but what is it about the South that makes people want to write horror stories?

T: There is a lot of dark history in the South, and many locations which are evocative of it. “Southern Gothic” is a loose sub-genre explored by some who are familiar with what some of these settings can convey, for example, but I wouldn’t classify much of my own work as gothic even if some others have referred to it as such. I have explored some of the local history here in the border town where I live, and it offers some interesting possibilities for my writing. Not long ago, I wrote a short story which was based here (something I have never done before), but set almost a century earlier, when it was a much different place and a far more unpredictable one. 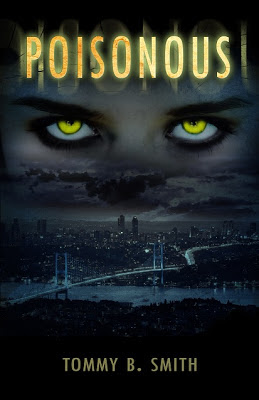 J: I read Poisonous, but my reader (Hi Mom) has not. Tell her about it:

T: Poisonous is the story of the Living Poison, a force which pervades a girl, Lilac Chambers, and warps her to commit acts of violence while lending her the heightened physical abilities to accomplish them. Others who come into her life often suffer for the destructive entity inside her, and Lilac’s path is often one of isolation. Other central characters include a retiring detective and the ringmaster for a traveling circus, both of whom become ensnared in the havoc and must scramble for some way to defy the Living Poison.

J: Did the idea of a living poison come to you from drinking moonshine?

T: No, that was mostly gin.

J: How does this compare to the whiskey you make at home?

T: Moonshining isn’t really my forté. If I did try to make some of it, it probably wouldn’t be drinkable. It might even be poisonous. That’s what happened when I wrote a book.

J: I thought everyone made moonshine in Arkansas. I thought it was like scrapbooking out here.

T: We have liquor stores now, so many people don’t bother anymore unless they live, say, way out in the hills or something.

J: I heard you were musical. Can you play me something? Here’s a jug. Or are you more a washboard kind of guy? 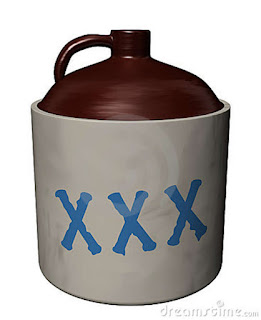 T: Years ago, I played the keyboard and worked on some musical projects, while at some point I became the lead vocalist of a couple of different bands. I enjoyed the creative process and appreciated the musical end of it but encountered numerous issues which overwhelmed those aspects. By around the early 00’s, things weren’t working out and I fell away from it, weary of swimming in a sea of disappointments. It wasn’t so long afterward that I returned to my writing, which I had done for many years before, although previously for myself rather than for publication or for the public. I made a sort of tribute to those years when I wrote the short story “Bottled Rituals,” which was featured a few years ago in the Heavy Metal Horror anthology.

T: I’ve been consumed by creative energies for as long as I recall. It’s easier for me to find an outlet for it than to try to resist being who I am. In the beginning, picking up a pen or a pencil provided this outlet. These years later, it’s a computer keyboard. My experiences have, over the years, shifted my writing to a darker angle, resulting in the material that everyone has seen from me in the past years until today.

J: Tell me about your short stories.

T: As far as writing goes, it’s all I did for years. I write horror, but I also write fantasy. I wrote a short story called “Walls Between Worlds” which is more of a psychological thriller. Years ago, I wrote a story called “Mechanized,” the only science fiction-styled story I have ever written. I’m apt to genre-hop at any given second, but there are certain tendencies in the direction of my writing which indicate “dark fiction” as an accurate reply when I’m being asked what I write.

J: I can’t feel my hands. Nuts, I spilled some on my notes. Is it supposed to burn the paper like that?

T: Should we be drinking this? I hope it isn’t kerosene.

T: It isn’t kerosene then.

J: It’s ironic. Last year the Horror Writers Association meeting was in Salt Lake City and I didn’t even know it. I could have walked there. This year, when I really wanted to go, it’s too far, but a corn-cob pipe throw for you. I’m envious. Tell me about the World Horror Convention. Was it as cool as I thought it would be?

T: A large portion of it is something of a writer’s conference with horror as its focus; there are panels, workshops, readings, interviews, book signings, and much more, including parties and of course, this convention was held in conjunction with the Bram Stoker Awards. In attendance you’ll find a variety of the genre’s fans, authors, artists, publishers, and other contributors from those new to the business to those who have been in it for quite a long time. It’s useful to plan from the programming schedule, I’ve found, because there is always something going on.

J: Gossip. What really happened in New Orleans? Give me the dirt.

T: But...if I spill all of the dirt in this interview, I won’t be able to blackmail anyone. I will say that I enjoyed meeting those familiar and new alike, and taking in the various and differing perspectives from those in the business. I enjoyed the opportunity to have a drink with some of my fellow creators and engage in some entertaining and sometimes ludicrous conversation, also. On Friday night, I was present at the mass signing along with many of the other authors who were at the convention, all signing copies of our books for not only those attending the convention, but the general public as well. On a few occasions, my wife and I took opportunities to wander through the city and absorb what we could of it, although there wasn’t as much time available as we would have liked. We hit Bourbon Street just about every night, and somewhere in the middle of everything we found time to visit the St. Louis Cemetery #1, the (supposedly) #1 most haunted cemetery in the United States, which houses the tomb of Marie Laveau, the “Voodoo Queen” of New Orleans.

J: I feel sick. How is this stuff made?

J: I’m always curious how people first get their works in print. What was your journey to a published book?

T: As mentioned, I wrote short stories for years, and the very concept of Poisonous began with a short story of mine published several years ago, around 2007. About a year after that, I revisited the events of the short story and began to expand on its outcome, to write another Living Poison story. The outcome was the novella, Poisonous.

J: Who are your favorite authors? Who’s influenced you?

T: I have numerous favorites. I enjoy the classic works that are thought to have molded much of genre fiction (i.e. Lovecraft, Blackwood, Howard, Tolkien, Dunsany, Poe as well although I’m not such a fan of poetry in general but I certainly enjoy the short stories; I’ll throw Richard Matheson in also) and when we slide into the matter of “modern” fiction my tastes branch into numerous works and authors wherein my favorites might shift by the week. When asked of their influences, I’ve noticed that many authors smack down a list of anywhere from five to thirty authors’ names. You probably won’t see me give this precise of an answer. Although my reading habits have held some influence on a few stories I’ve written in the past, my primary influences are experiences, discoveries, the world, and my world.

J: What are you working on now?

T: I’m always writing new short story material. Regarding longer works, I’m actually writing another story set in the city of St. Charles, where the events of Poisonous take place, although this is not a sequel to Poisonous. J: What are your links?

Anyone interested in what I’m doing is welcome to find me at either or both.

J: I can’t finish this. It's Poisonous. Are my eyes turning yellow?