We had a bit of a water leak at the Blog Mansion. The dishwasher was installed incorrectly. I’d hooked it up to the water main instead of a feeder cable. I thought it’d clean things better. Live and learn. The flood didn’t stop me from having Horror Writer Jay Wilburn over for a chat.

Johnny: I called another plumber. The city cut the water off at the pump station. Ignore the phone. I’m sure it’s the aquarium again. They’re so testy.

Jay: Something moved there.

Johnny: Keep your hands and feet inside the boat at all times.

Jay: What was it?

Johnny: Something from Miskatonic University, I’m sure. I lease storage space to them.

Jay: Why don’t we go outside?

Johnny: It’s too hot. Plus we’re close to the fridge here. 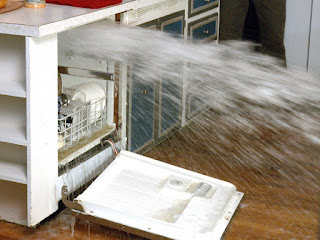 Johnny: Have a cold one and tell me how many books you have in print?

Jay: I'm in a number of anthologies. SHIFTERS is a charity anthology of which I am quite proud. HORRIFIC HISTORY represents some of my best work. I'm in a shared collection THE DRAGONFLY AND THE SIREN with T Fox Dunham. My novel LOOSE ENDS: A ZOMBIE NOVEL is doing well at the conventions. TIME EATERS will debut at WorldCon, The World Science Fiction Convention, in San Antonio at the end of August.

Johnny: Do you have a favorite? 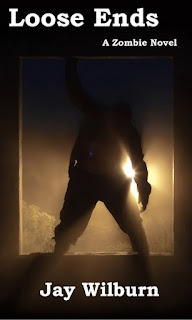 Jay: LOOSE ENDS represents me well. If only one work survived me, I'd want it to be that.

Johnny: Do you really give yourself a target of three thousand words a day, a million words a year?

Jay: When I started doing this full time, I wanted to be prolific to give myself the best chance of sticking with it. I started getting up into my head and the work suffered a little. I kept getting stuck and falling short. I set my computer to track my word count without me keeping track through Google docs. I check occasionally and I'm staying above 3k most days when I don't think about it. I guess the short answer is yes and sort of.

Johnny: Impressive. How do you do that exactly? What’s your day like?

Jay: I wake up each morning to the sound of a screaming baby. I feed both kids and see my wife off to work. I play with the kids and clean up. I write once they get tired of me and settle into TV. I put the younger one down for a nap and write some more. I get everyone fed for lunch. We play outside, go to the park, go to the beach, or go to the aquarium some days. We come home and the little one will usually take another nap. I write. We do dinner once my wife gets home. I write. We do games, books, baths, bedtime. I write some more. I hang out with my wife. If she watches TV or reads, I write. After she goes to sleep, I write. I look up and it is two in the morning. I go to bed and repeat. Some days I take a nap or go grocery shopping.

Johnny: Before we get into your documentary, what do you think about the state of the industry right now? Specifically the role of the small press, independent publishers, self-published and the dying book chains?

Jay: I benefit greatly from an age when I can write, submit, sign contracts, sell, network, and promote without leaving my living room. It is also tough to stand out from the sea of other authors. Good, small, presses are noble institutions with small, under-rewarded staffs that serve the written word like missionaries in the wilderness.

Johnny: Tell me about your documentary Dark and Bookish. 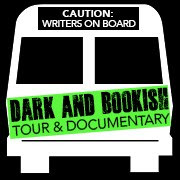 Jay: We have had a rough year in terms of losing some legendary authors in the dark fiction universe. It has come to light from a few well-known authors, and in some cases their widows, how much of a hand-to-mouth industry writing has become. Even the most successful make less than some of their readers in some cases. With traditional publishing shifting so dramatically in the Internet Age, there seems to be a new paradigm at play in the writing world that most people, including readers and writers, don't fully know. Dark and Bookish is going to focus on five featured authors including myself, Max Booth III, Derek Deremer, Jessica McHugh, and Adam Millard. We will tour part of the United States in the summer of 2014 including conventions, bookstores, and other events. The tour will serve as a stage to gather the stories of writers, publishers, book sellers, and readers to uncover this full story. I believe there is an important story to be told about the storytellers and the written word.

Johnny: You should swing by the Blog Mansion, or my house in Utah. I’ll be out in September with BEATRYSEL. (shameless plug)

Jay: We want to hear from everyone willing to tell us their story. In the next few months, we are going to pinpoint the window of the actual tour and where those stops will take us. We are also going to be producing a few unique publications to help fund the tour and documentary. Those announcements will be coming soon.

Johnny: So, do you think it’s possible to make a living in this business?

Jay: It's possible to live on the streets. On the other end of the spectrum, a few scratch out a true living. Others have a hybrid superhero career of office worker by day and word villain by night. Most people think my version of quitting my job and writing is stupid or insane. My son was sick and one of us had to stay home. I took my shot. Without daycare and after school, I only need to make half as much as I used to require. I have a little time to etch out next year's paycheck. I may be stupid or insane. One truth is that everything in this business worked for someone right up until everyone started doing it. This pattern repeats over and over because there are a lot of people scrapping. I discovered the author ranking feature on Amazon Author Connect recently. I've zig-zagged between 11,000 and 40,000. Not bad for the millions of would-be writers. Probably need to move up a bit if I want to pull down a check.

Johnny: What are you working on now?

Jay: Argh, something hit the boat.

Diver appears and takes off his mask.

Diver: I got the dishwasher hooked up but I can’t test it until the water’s back on.

Jay: Why don’t you open the door and drain the water out?

Johnny: You have no appreciation for decorating. The first floor is now a “water feature." So what are you writing now?

Jay: I'm creating an entry for the Jim Henson Company's Dark Crystal contest, I'm outlining a novella for a joint release from the Dark and Bookish authors, I'm hammering out a fourth novel, I'm fixing a completed third novel, I'm getting ready to deal with the edits on TIME EATERS, my second novel, and I'm always answering short story calls of every stripe. 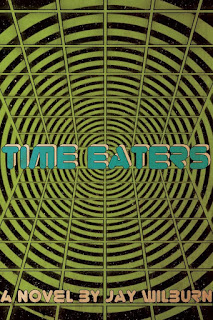 Jay: Darkness reveals truth in a sharper way than any other tool. To me, it is like asking why irony, why symbolism, or why dialogue. What people fear tells a lot about their entire person. What makes people angry reveals their motivation. What people do when they suffer tells their story. Horror does all this best. I appreciate light more when it shines through darkness.

Johnny: My patented question: how did you first go from writing a story to getting it in print?

Jay: I entered a zombie story contest with what would become Dark Moon Digest and I came in third. It was enough to make me believe my own myth.

Johnny: Has it gotten easier?

Jay: I'm better. My moments of greatness are popping through my stretches of pretty good more often. The ugly moments of average are showing up less. I see my problems more easily and that has made it tougher. I'm trying to recapture that raw edge I find in my early stuff when I reread it. I want to use that without losing any of the skill I've picked up through my million words of practice.

Diver: I patched the water main. You can tell the city to – Ughhhh –

Jay: Was that a tentacle? We should help him!

Johnny: I’m not getting in there.

Jay: You’re ruining your carpets. Is that blood?

Johnny: I hadn’t thought of that. Help me paddle over to the door. Where on the internet can my peeps find out more about you?


Diver: If there’s nothing else, I’ll be leaving. Sorry about your octopus.

Johnny: I doubt it was an octopus.

Jay: Are you okay? Who’s leg is that?

Johnny: So that’s what’s happened to the other plumber.
Posted by Johnny Worthen at 11:10 AM