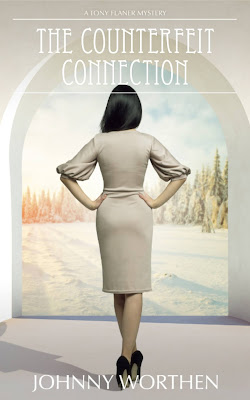 Each time a book of mine sets off into the world I’m possessed by a certain sadness. I think it’s akin to the feeling any parent has when watching a child move on, out of their control and protection. There’s a sense of wonder at the act but also self-doubt, did I do everything I could to prepare them? Will they be liked?

THE COUNTERFEIT CONNECTION is no different, and yet different. It’s my latest book, which means I’ve done this a few times before and so should be an old hat at this. I’m buoyed by the knowledge that readers of this book probably have endured a few previous iterations of Tony Flaner and so know what they’re getting into. There’s a huge relief in knowing that, in putting a book into the hands of fans and friends. There Is also however the worry that I’ll disappoint, that the very people I’m most grateful to, the ones who allowed me to produce this book, won’t like it, that I’ll fail to meet exceptions. That it won't meet the level of its predecessors. That the previous novels, if they were good, were more the result of luck than my skill.

This is imposter syndrome. It is a common thing among creatives, I hear. I know few authors, if any, who don’t wrestle with this idea to some degree. We are so used to rejection that any kind of acceptance seems like a dream, a lucky break, an undeserved theft of affection and attention. There’s also always the phenomenon of not understanding how any book was made. No two projects of mine have manifested the same way ; I get an idea and write it, somehow. In looking back over a project, it’s a blur of energy, effort, and emotion. Did I do that or was I possessed? There’s a disassociation involved that furthers the idea of separateness, of falseness and fakery.

I talked to a big author once – damn if I can remember her name now, such is me, but I’ll never forget what she said about getting books on the New York Times Best Seller List and other accolades she’d earned. Each time, she said, it was worse. It was the con extended. There was never a feeling of “oh, yeah, now I deserve this.” Instead it was that somehow the lie had gotten bigger. She compared it to “leveling up,” that each time the feeling grew and her need of acceptance had to grow too – a new boss level and she needed to just face it.

I’m a big fish in my little pond. For my entire career I’ve been punching above my weight class. I’ve used my special powers of being memorable to my advantage. I’ve used my rampant insecurity to hide myself behind wit and humor. Self-effacing and boisterous, I am shielded. These have served me well, but they’re temporary fixes. In the time of twilight, staring at a blank page, riding the train home, wondering at my Amazon page, I can’t help feeling that the con has gotten out of hand, and at any moment, I’ll be revealed as the fake I am.

This is the theme of THE COUNTERFEIT CONNECTION. I explore the idea of forgeries in personality and art, all while Tony himself wrestles with his insecurities. He’s never understood what Allie sees in him. He’s seldom taken a hard look at his own work and wondered if he fell into the success or earned it. Usually he is immune from such heady thoughts, but Tony may be growing up a bit. Life is descending and comparisons are inevitable, especially with a high school reunion coming up and an old rival making moves on his lover.

A nice set up personally, but why stop there? The world is full of fakes, creators and artist are all characters in their own worlds, facades, personalities with values defined by expectation. It is a major subject, strangely easy to write about, and unfortunately, unsolvable.

That’s the cheat. I will spoil my new book, a little. I do not solve this problem with Tony in THE COUNTERFEIT CONNECTION, though I try. I investigate and tease, I exemplify and simplify, but the underlying issue is hardly revolved. I land on a moment of recognition regarding the impermanence of it all and take hope in that. My answer? The best anyone can do is to do their best  and hope their armor is strong enough to protect them from not their failures, but from their successes.

The book is a fun mystery, a trek around my area with all its hypocrisies and ironies. Tony is in his element, smog messing with his senses, problems of his own creation, old friends reaching out for help he’s not sure he can deliver on. A new boss. A time to level up.

And so with stirring trepidation and the sure knowledge that I have failed in whatever grand experiment I undertook and will be revealed as the imposter I am, I can only hope that my readers see through these faults and find a friend, enjoy the ride, sympathize, empathize, euthanize their own fears with a few hours of Tony Flaner in THE COUNTERFEIT CONNECTION. 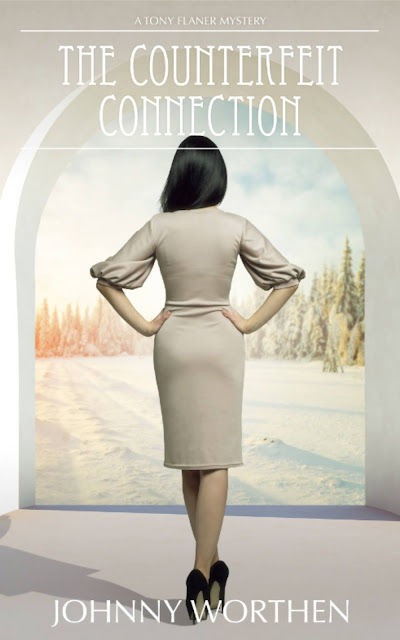 Posted by Johnny Worthen at 6:43 AM