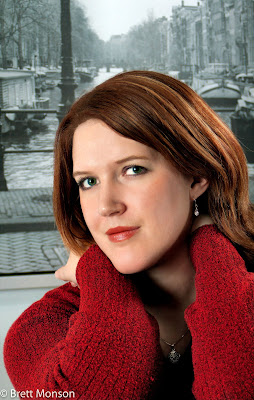 It was the middle of the night at the Blog Mansion and someone was pounding on my door. I’d given my servants the night off. They were still in shock from giving me a sponge bath and needed a little zen time.

At the door, I found debut author and Vampire writer Adrienne Monson.

Adrienne: It is three o’clock.

J: I meant in the afternoon.

A: You should learn to be more precise. Can I come in?

I led Adrienne into my third study, the formal one, off the main hallway. We stopped once to rest and catch our breath before arriving. Even though the hour was late, she was alert and noticed each time my robe slipped open. Note to self: don’t skimp on terrycloth.

There were still embers in the fireplace. I threw a stack of rejection letters on it to get the fire back. It erupted in flame like a meth-addled phoenix.

J: Coffee? No. How about a cocktail weenie? I should still have some in the kitchen from earlier. If I can remember where the kitchen is. They keep moving it.

A: I'm fine, thanks. You probably don't have my preferred diet in stock, anyway.

J: Just push the cats off the couch if you want to sit there. If they hiss, say the words “bubble bath” and they’ll move. Maybe not the black one. I’ve never seen that one before.

A: Don't look at me. I'm the vampire writer - not a witch writer. 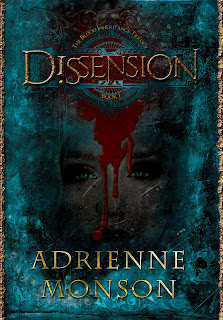 J: So what is your book called?

A: Dissension, book 1 in the Blood Inheritance trilogy

J: Who’s publishing it and when is it coming out?

A: Publisher's name is Jolly Fish Press. They released it yesterday,  February 23rd.

J: Why did you call it that?

A: Because my publisher liked that name.

J: If your publisher liked you to jump off a bridge would you do that?

A: Depends on how much they'd pay me and how high the bridge is. Also, it would be a plus if water were below the bridge. ;)

J: So tell me about Dissension.

A: Vampires and Immortals war with each other, both hoping to find the prophecy child first. Vampire Leisha still loves her estranged husband, an immortal who's sworn to kill all vampires.

J: Is Dissension a cliff-hanger?

A: I'd say more open-ended than a cliffhanger. Though a lot of readers have told me they can't wait to find out what happens next.

J: What’s the status on the next two books in the trilogy?

A: The second one has been turned in to my editor - I'm awaiting his notes. I'm just getting started on book three, but I already know how it all ends.

J: Do you see your book as conforming to or expanding its genre?

A: Neither, really. I just write where the story takes me. But it does have some classic paranormal romance in it while recreating vampires and where they came from. So I guess those negate each other.

J: Where did you get the idea to write it?

A: I've always lived a double life inside my head. When I get bored, my mind wanders off and turns into a movie about anything and everything. So that's what happened with this story, too. I was sitting at my high school graduation, got bored, and thought of this idea. From there, it developed into three books.

J: How much sex and violence is there in Dissension?

A: There are references to sex, but no sex scenes. There is a lot of fighting, but it's not very graphic.

J: How long did it take you to write? The book, not the sex and violence.

A: Four years, but keep in mind that I was just dabbling in my free time at that point.

A: Because I didn't know you then, Johnny! No doubt you'll be starring in my next... well, no. In one of my other novels sometime in the future...

J: Would you consider writing about me in your next book?

A: Sure. You could be the bad guy.

J: Is there still time to edit this book to include more about me? Maybe in the eBook edition?

A: I don't think I'm going to grace that with an answer.

A: Your narcissism. It's very inspiring.

J: Explain your process of writing a book not about me:

J: This is your debut novel, the first published, but have you written anything else before not about me?

A: I've dabbled with other stories in the past. I have a rough draft written that I'd like to polish up after I finish the trilogy. But no completed works.

J: Tell me how you went from writer to author – how you found a publisher.

A: Good timing, really. Jolly Fish was presenting at my writers group and I happened to coordinate the whole thing. When they invited us to submit our work, I took them up on it.

J: Besides me, who are you favorite authors?

A: Kim Harrison, Karen Marie Moning, Branden Sanderson, Jim Butcher. I could go on - I have a lot of favorites.

J: Give me your blurb, the hook, something to catch the readers and draw them in like tabbies to a can-opener.

A: Leisha was once a loving mother with an ideal family. Though this was over two thousand years ago, Leisha still holds that time dear to her heart. But for now, she must focus on trying to escape the eternal and bloody war between her kind—the Vampires—and the Immortals, an undying race sworn to destroy her people. Soon, Leisha finds herself captured by the government only to be saved by a young and mysterious human girl. What entails is the beginning of a long and torturous journey as Leisha and her newfound friend run for their lives while searching for the one thing that can end it all—the prophecy child.

J: How is it to live and write in American Fork Utah? 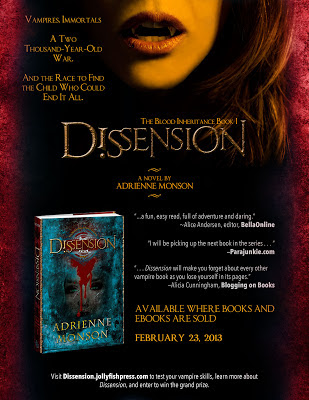 A: I love the area. It's very family oriented - which is great for my kids. Though most people tend to get that glazed look when I tell them what my books are about. :)


J: We better get going if we hope to find the front door again before dawn. Where can people find you online?