IN THE WAKE OF CAPTAIN LORD - Cover Reveal

I am so excited. If you haven't heard already, here it is. Tony Flaner is back! His third novel-length adventure is set on the high seas, or rather, kinda causing a coastline, But there's water—salt water. And bears and eagles and murder

IN THE WAKE OF CAPTAIN LORD

Cold murder and old flames sailing the Inside Passage

Tony doesn't know why he did it. He just went. Forgetting to even call Allie, he boarded a plane and then a cruise ship to Alaska. While he's trying to figure out what is wrong with him, he has to figure out how an old college crush can get out of a murder charge when she admits to stabbing her millionaire husband.

Tony Flaner is back, and his newest case is his coldest and most complicated yet. Can he avoid the all-you-can-eat buffet along with the bullets shot at him? Eh, no. Of course he can't.

Tourism, murder and blame aboard an Alaskan Cruise Ship full of multi-level marketers, comedians, and killers and all bound for trouble. 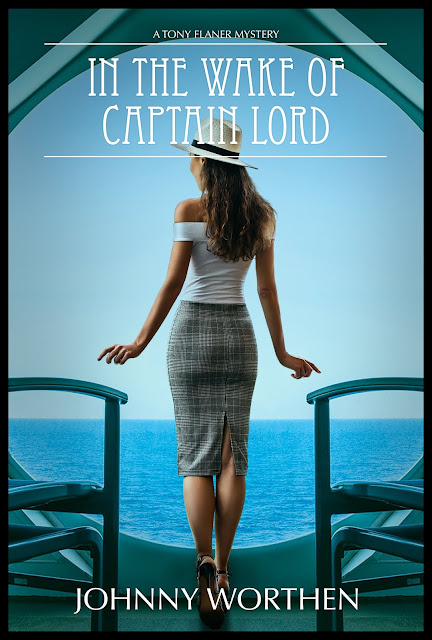 Impulsive, sarcastic, Tony Flaner takes a trip down denial when he joins a luxury cruise without telling anyone until he’s gone. Responsibility has never been one of his strong points, but this is one for the books.

Aboard the Royal Danish Cruise line ship Success, Tony wrestles with his failings while murder is afoot. As fate would have it, an old flame is on board, along with a multitude of multi-level marketers – The Pod People. When the flame’s S.O. turns up D.O.A, it’s S.O.S for Tony to break a complex web of mayhem and murder in the short time it takes to binge on butter buffets and bear brawls, pondering personality problems along the Alaskan coastline.

Posted by Johnny Worthen at 6:56 PM